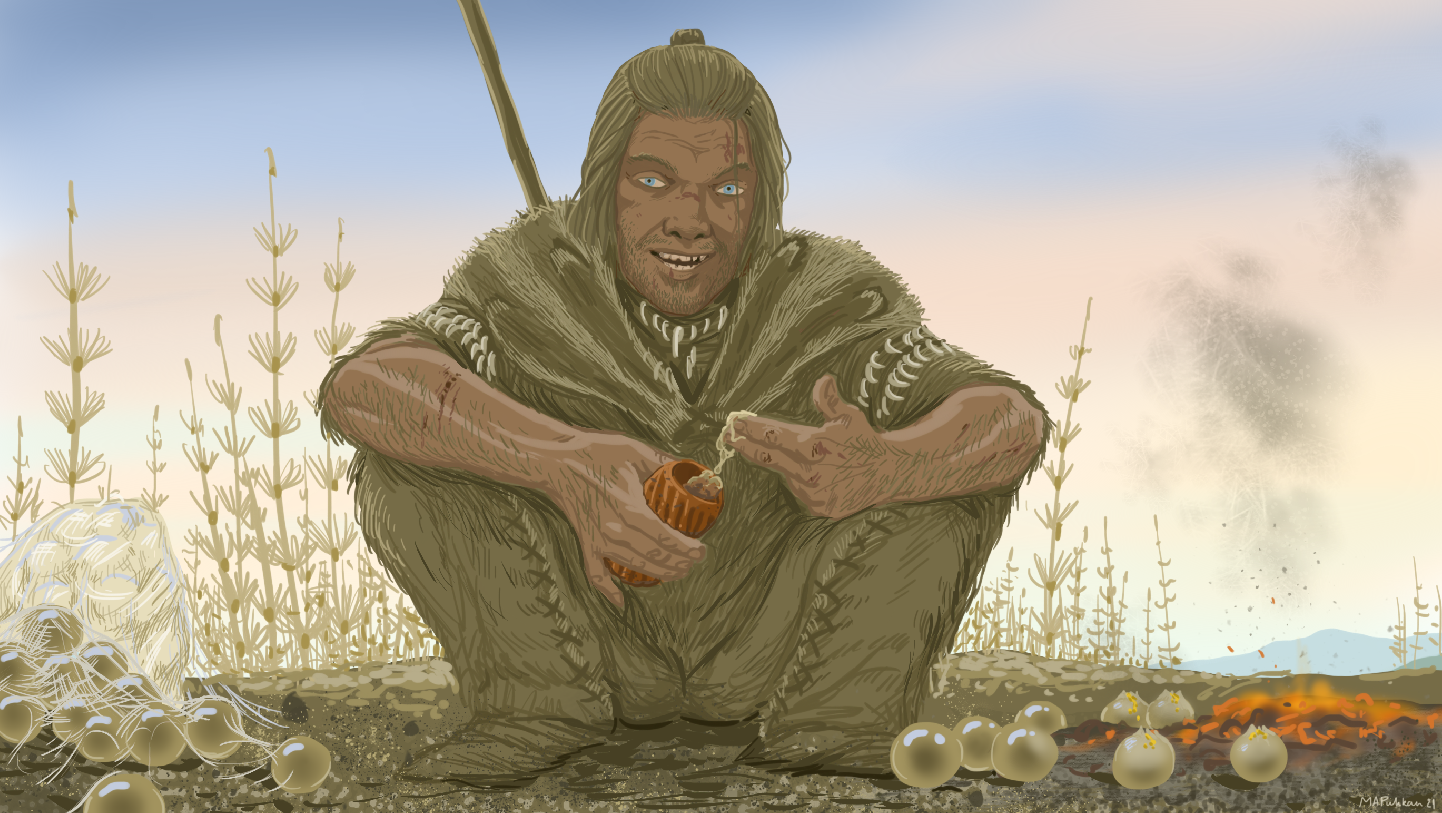 There really was no shortage of work. As the first order of business, he decided to build a hut for himself to pass the next night more calmly. But before starting on the construction, he had to deal with the communal labour Naiscy had assigned to him in the morning: destroying the spider-rats and emptying their egg spawns. He went to Badger-Bart’s aid.

Badass learned quickly to overcome the spider-rats and was already quite adept by evening. They spent the whole day in the forest. Whenever they found a large egg spawn, they stopped for a meal, cooking the eggs in warm ash. When Badass got hurt, Badger-Bart dug out a jar of yellowish goo and spread it on his wounds.

“It’s badger fat, very useful; prevents infection and speeds up healing,” he added. “Irreplaceable stuff, when dealing with those spider-rats. A pity that badgers are so hard to find.”

“Not very. On the lakeshore, you can make it in one day, easily. But what will you trade them for it?”

“What do you mean trade?” Badger-Bart was surprised.

“We won’t trade anything, we’ll kill them. How do you think we get the fat?”

Only now did Badass understand what “badger fat” really meant. At first he had thought it was fat traded from the badgers in exchange for something else. But it was really their fat… He looked at the yellow stuff on his arm in disgust. The badgers had helped him, healed him, and not with their own fat. At least he didn’t think they would use their own kind to produce a healing salve. No intelligent creatures would.

“I’ll tell the others when we get back. We’ll assemble a band, hunt badgers tomorrow,” Badger-Bart explained excitedly. “They make nice leather too, only the meat is no good, stinks like crazy. Although in the colony we last attacked, there were many thin and shaggy ones, only good for making straps and tools. But a few were quite chubby, their fur was proper stuff. I lined my whole house with their skins, very warm and cozy. That’s why they took to calling me Badger-Bart.”

Bart laughed cheerfully and slapped his thigh, as if making a good joke.

“Tomorrow you’ll show us their nest.”

Badass nodded mechanically, although he thought he wouldn’t do that. Now he understood why the badgers kept pointing their spears at him. They must have heard that humans were hunting them.

“Maybe we could establish friendly relations. They fixed my injuries, maybe they can teach us some other kind of medicine. There must be healing herbs about?” inquired Badass. Badger-Bart stopped eating and wiped his mouth with his sleeve. He rolled his eyes in answer.

“What are you talking about? How can they teach us? They are beasts, no one can understand their barking.”

“I could - as long as my wrist computer had juice. Don’t you have a translation program?”

“Translation program? I don’t know, my energy supplies were exhausted in the first couple of days and I still haven’t had the chance to charge my computer and nanobots.”

“Isn’t the lack of energy our main problem?” asked Badass. “Maybe we should think of a way to restore our energy? Build some kind of generator? If our nanobots were working, we wouldn’t need to hunt badgers, the bots would heal us.”

Badger-Bart grabbed his weapon and started cleaning it of webbing and spider-rat blood.

“You’re not the first to think of it. Tooler has been building some contraption for several weeks, but he doesn’t seem to get anywhere. I wouldn’t count on it before the machine is actually ready. Until then, we’ll use badger fat, and anyway - don’t forget the skins. Nanobots won’t warm you at night.”

Suddenly the bush rustled nearby and a growling shape loomed before the men. Badass’s heart missed a beat. A brown furry creature with long paws and claws, some animal’s thigh bone held in one hand as a club, swaying up and down menacingly.

“Wolverine,” croaked Badass. “My prey,” growled the wolverine, his red eyes staring at the large egg spawn at their feet. Badger-Bart got up slowly. It seemed he was only used to fighting spider-rats and this new creature made him hesitate. But Badass remembered quite well who had dragged off his suit along with his dead comrade.

“I’ll show you prey,” he hissed, grabbing his club to attack.