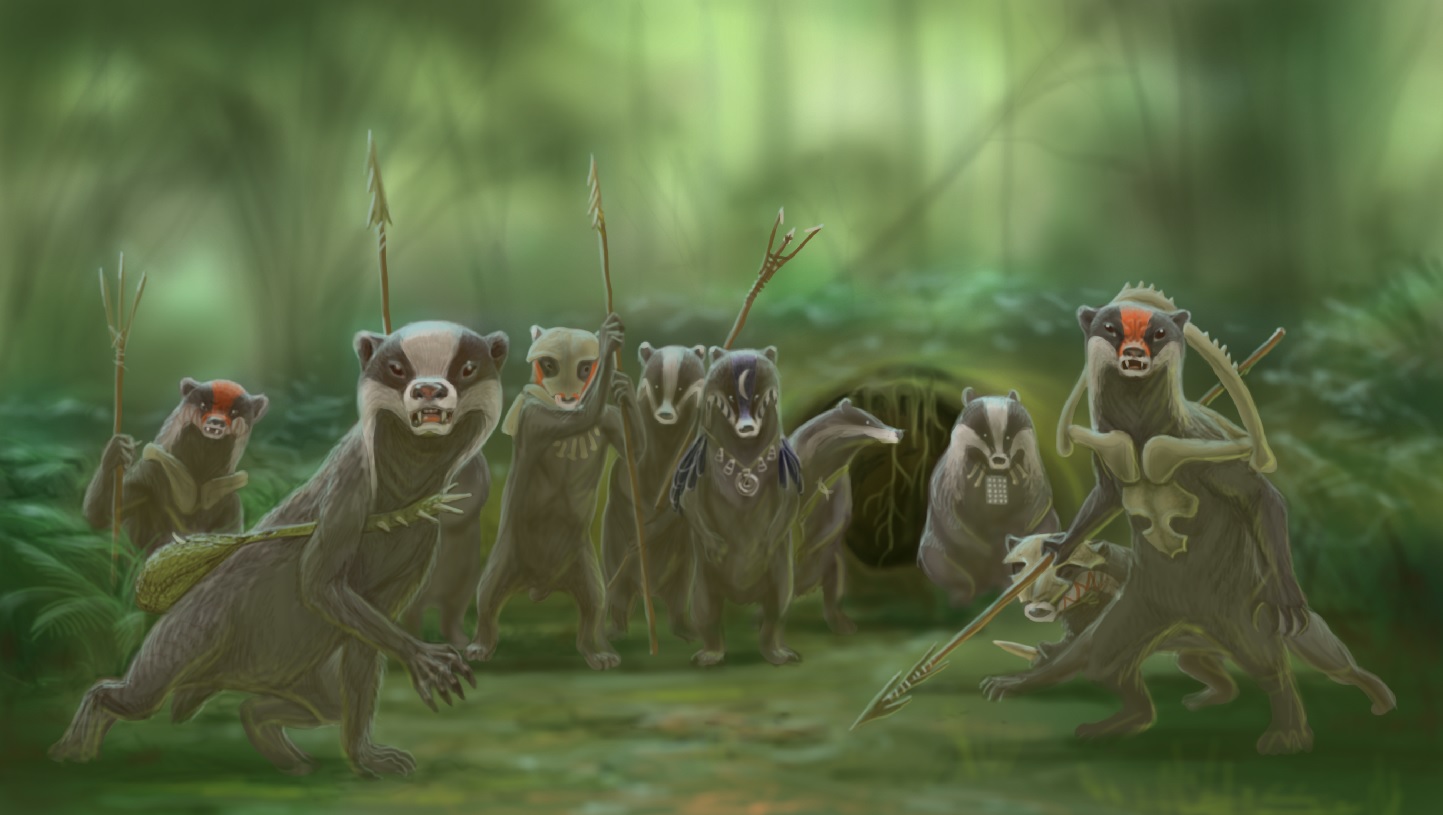 The cave was dug into the sand hill and strange plants grew on the slope, hiding the entrance from strangers’ eyes. Only an almost unnoticeable little path wove through the bushes towards the lake’s inlet, stretching into the forest and flashing from time to time between distant trees and horsetails. As they walked, Badass thought what he would say to the badgers and how exactly. It had to be diplomatic so this mess wouldn’t completely ruin their relations with the humans. He was so deep in thought that he didn’t even notice when Keio’s lap-spider-rat disappeared somewhere. Badass didn’t mind, not at all, because each time he glanced at the spider-rat, his hand inadvertently clenched his weapon. Now that the creature had slunk off into the woods, Badass felt more at ease. Keio asked something and Badass mumbled a reply, not even quite noticing what was being asked and answered.

They soon arrived at the spot where he had emerged from the badger set, mere days ago. The entrance was a huge round hole, with a well-worn path leading in. On the doorstep, Badass jumped back. A forest of bone-tipped spears and wickedly shining badger-eyes greeted him from the depths of the set. A warning growl from many throats denied him entry, quite unambiguously.

“Peace, I’m a friend,” said Badass, hearing the forest come alive around him and Keio: they were quickly surrounded by other badgers streaming out from other openings. Looking around, he realised that Badger-Bart might have been the one in danger if he attacked this set - there were so many of the tiny armed creatures. He now had time to look at them more closely: the badgers weren’t all alike at all, as it had seemed the last time. Many had decorated themselves and painted themselves with different markings in red, black or white. He couldn’t say whether these markings were merely fashion or carried some deeper significance.

One of the badgers, already familiar to Badass, struggled forward. It was the same one who had rescued him from the frog. He didn’t bear any special markings, but the way he held his frog-hunting trident was unmistakably the same. And that look in its eyes, slightly disdainful and ironic - there was no doubt.

“Badger,” said Badass, forgetting he’d been told its name the last time. Surely it had a name - how else did they distinguish between themselves.

“Human,” replied the badger, just as before, and Badass was now certain he was speaking to the same individual. “Whom did you bring along?” asked the badger. “I haven’t seen her around here before, what does she trade?”

“Um…” said Badass, “She isn’t trading anything yet, as far as I know.”

The badger didn’t like that answer and his movements became a shade more aggressive. The surrounding furballs adjusted themselves, pointing their weapons toward Keio and the elk.

“I must have overestimated your intellect,” said the badger. “I tried to phrase the task as simply as I could, but humans clearly aren’t made for thinking.”

“Now hold on,” said Badass. “I understood perfectly well that you want the Iron Merchant, but…”

“Did you find the Iron Merchant?” the badger interrupted.

“No, I didn’t,” admitted Badass. “I’m here to warn you of an attack.” He gave a quick summary of Badger-Bart’s plan.

The badgers listened intently, nodded and exchanged glances. Their noses and whiskers, their paws and even the hair on their backs shook rapidly as they conversed quickly and wordlessly. Badass was forgotten.

While Badass was talking to the badger, Keio examined the hostile-looking creatures who surrounded them, listened and wondered. During the pause in conversation, she asked Badass: “How do they understand you?”

“Well, the computer translates, I charged my batteries in the village.”

“No-no, I get that the computer translates their words. But you used normal ship speech to talk to them. How did they understand?”

Badass wondered at that - indeed, how?

“She doesn’t have a computer?” asked a nearby badger who wasn’t really getting involved in the others’ discussion. The badger wore a necklace of black and white magpie feathers with some kind of silver amulet hanging from it. On his cheek, on the white stripe on the neck, he bore the marking of a half-moon. His appearance reminded Badass of the shamans of ancient Earth.

“No,” said Badass, “or rather, she has a computer, but it’s not working right now.”

The badger shaman twitched its whiskers, scratched its armpit with a claw. Badass couldn’t tell whether it was considering his words or discussing with the other badgers in their wordless tongue. But it must have been just thinking, for after a while it spoke:

“Tell her then, that we have seen enough of humans and their iron to learn your strange language. We understand human speech, and that of the merchant, but we don’t speak it, we can’t, our throat is made differently.”

Badass nodded. Very interesting, he thought, so they have encountered humans before. They couldn’t have learned the human tongue during the time we’ve been here. He relayed that to Keio.

“Hm, let me try something,” said Keio, fussing with the spider-silk pouches slung over her clothes.

“Whom did you learn Human from?” Badass asked the shaman.

“I learned from my father. All the old technology uses that language and we, the sons of the New Moon, have always used old tech.”

“Where does that old technology come from? Isn’t it made by humans?” Badass continued. The shaman’s nose wrinkled, it blew at an insect circling its head and shrugged its furry shoulders. Its whole posture was like someone had asked it why the sun shone or the grass grew.

“It comes from underground and was made so long ago that no one knows when it was created, or by whom. But our ancestors come from the underground caves. I don’t think they built machines that speak Human. My grandfather thought that the ancestors must have bought all that stuff from the Iron Merchant and dragged it underground.”

“The Iron Merchant,” Badass repeated to himself.

“But now all the machines have failed over time. Noisome wants to get some of them working again and hopes to buy spare parts from the Iron Merchant. We’ve heard the Iron Merchant sells them, but he travels far from here. If you see him, send him our way.”

The shaman’s glance indicated that Noisome was the same disdainful badger who had saved Badass from the frog and asked him to find the Iron Merchant.

Meanwhile, Keio had dismounted the elk, found something in her pouches, put it in her mouth and was now chewing at it with abandon. Her eyes grew strange again and she seemed to go somewhere far away. She kneeled in front of the shaman and offered to press their palms together. The badger accepted the contact, handed its spear to a companion and pressed its paws against Keio’s palms. Badass looked on in wonder as the shaman entered a trance similar to Keio’s elk. The shaman’s skin twitched and its whiskers moved, just like in silent conversation with its mates, and Keio seemed to answer it. Her face shifted and she swayed. It seemed that even if Keio was cracked in the head, she could somehow communicate with the local life forms. But how? Now wasn’t the time to ask, but Badass certainly intended to do it later. He noticed uneasily that afternoon was creeping on. He had spent a lot of time meeting Keio and the badgers didn’t seem to hurry with their discussion. But Badass didn’t have time to spare. He had to make it back to Sprucetop the same day.

“Noisome,” he addressed the disdainful badger. “I’m taking Keio back to our village before our people realise I came here. I hope that by the time Badger-Bart assembles his hunting party and arrives, you will be somewhere else. I really don’t want a bloodshed between humans and badgers.”

“Don’t worry,” answered Noisome. “We have a hiding place for cases such as this. Humans aren’t the only threat around here. Nature itself forces us to seek refuge underground sometimes. We will go below, to the ancient birthplace of our people. There we will be protected.”

Badass nodded and patted Keio on the shoulder.

“But they won’t let you stay here.”

Oilskin must have been the shaman that Keio had played patty-cake with.

“Yes,” confirmed the shaman. “She will stay.”

Maybe that’s for the best, thought Badass. If Badger-Bart should still find the badgers, we might be able to convince him to give up the hunt if Keio is with them.

“Alright, so be it,” nodded Badass. “I will return and find you after the hunt.” He was sad to give up his new acquaintance, but it couldn’t be helped, the crazy girl preferred animals to people.

He tried to pat the elk as he was leaving, but the animal immediately snapped its teeth at him and Badass barely had time to withdraw his hand lest his fingers be bitten off.

“Idiot,” said Noisome’s voice behind him. Hopefully it meant the elk, not me, thought Badass. The circle of badgers opened before him and he passed through. He glanced back briefly, considering whether to convince Keio to come with him, but gave up. The girl seemed to enjoy the badgers’ company.