If Badass hoped they wouldn’t meet any badgers on their way and the hunting party could blow off some steam with the giant frogs, he was mistaken.

“There,” breathed Badger-Bart as soon as the set drew near. Badass looked to where Bart pointed and noticed two young badger cubs with Noisome. They’re not intelligent creatures, thought Badass. I told them several times to go and hide, but what do they do? They come out for a picnic right next to the trail, in plain sight. All three were snacking on something, their weapons leaning on a nearby trunk.

“You stay here and sit still, you make more noise in the bush than combat bots,” whispered Badger-Bart to the others around him. “I’ll sneak as close as I can and you jump out when they spot me. Then give them hell and make the earth quake!”

In the blink of an eye, Bart disappeared into the thicket, leaving only a whisper in the leaves. Badass had to give it to him. Although Bart had spent his whole life on a starship and mere months on the planet, he could already move soundlessly in the forest. But Badass couldn’t allow Badger-Bart to kill Noisome, he had to do something fast. Something to keep Noisome alive, and keep Badger-Bart from knocking him off in his anger. He couldn’t exactly shout out loud. His eyes swivelled around like telescopes, looking for a solution, and stopped on a large black worm with tens of tiny legs, settled on a small branch. A quick glance the other way told him no one was looking at him: the entire hunting party was holding its breath, observing how Bart crept closer to the badgers. Badass snatched up the worm and threw it into the collar of Balance, who lay ahead of him. The startled worm crawled under Balance’s clothes and quickly provoked a reaction. Balance started to fidget restlessly, then suddenly shouted, jumped up and pulled off his clothes. He howled in pain and terror, and everyone, Badass included, were so frightened they forgot both Bart and the badgers.

“Ow! It hurts! Something’s gnawing at me,” Balance screamed, finally tearing off the upper part of his tattered suit. His back was a terrifying scene. The black centipede had attached itself to his skin and was pumping his blood like a machine, growing larger with every second. Within a few moments, it had swollen to the size of a palm.

“Get it off, kill it!” screamed Balance, but no one reacted to his cries for help: the bloodsucking centipede looked so terrifying that none of them wanted to touch it with their bare hands, but weapons might have harmed Balance. The man collapsed, his face pale. As he fell silent, they could clearly hear the slurping of the bloodsucker. Its mouth grew along with its bulging body and it seemed the insect would soon devour Balance’s internal organs. This pushed Badass to action. He jumped closer, swung his club wide and hit the bloodsucker with all his might. It was easy now, for the centipede had grown to the size of a man’s head: it wasn’t possible to miss, and so he didn’t.

The bloodsucker exploded like a supernova and left Balance shaking on the ground, pale as a sheet, unable to utter a word. He just groaned and moaned quietly, on the verge of losing consciousness. But the dormant nanobots in his body set to work. The wound on Balance’s back stopped bleeding and closed slowly. A few moments later, Balance’s moans died and some color returned to his pale cheeks.

“You are, buddy, you are,” said Badass, suddenly remembering the badgers. They all turned at once to see Bart wrestling with Noisome on the ground. A dead youngling lay beside them, the other one had disappeared. Badass left Balance, whose life wasn’t in danger any more, and ran toward the fight. The angry confrontation had come to a standstill. Bart, heavily scratched by claws, had gotten hold of Noisome’s fur and pushed him to the ground on his belly. Noisome gnawed helplessly at the grass but couldn’t reach Bart, who was straddling him.

“I’m coming,” Badass shouted to Bart and rushed into him, pushing him off Noisome so they rolled together into the bushes under the trees. He landed face first onto some plant and felt its thorns tear up his face. Skinny, happy to get some action, immediately announced: “I recommend ceasing the current dangerous activity and withdrawing from the source of danger.”

“Already ceased,” grunted Badass through gritted teeth. From the corner of his eye, he noticed Noisome getting up, but the badger’s feet wobbled under him and he could barely stand. Badger-Bart’s hundred-kilo weight was clearly too much for Noisome, a badger half his size. In the next instant, Tooler appeared behind Noisome and jumped him.

“Got it!” he shouted. Tooler’s voice was shrill with excitement. Badger-Bart and Badass got up from the thicket, groaning. Badass swiped his face: the hand came away red with blood. His back and side were burning and he had hit his knee. They had rolled over several boulders and giant acorns: it was a miracle they hadn’t broken any bones. And all in vain.

“Thanks, you klutz, you were a great help,” Bart snapped at Badass.

But Bart didn’t have time for his apologies. The thrill of the hunt had taken him completely. His eyes sparkled, his face was red and his injuries and already clotting blood only earned a quick glance.

“One got away,” he shouted, struggling out of the bushes. Naiscy and the others arrived at the same time. “After him, before he warns the others!” Bart urged them on.

“Here.” Naiscy gave Bart the badgers’ bone-tipped frog-hunting spear that they had left leaning on the trunk. In a moment, the whole crew rushed toward the set after Bart, disappearing into the tunnel mouth. Only Tooler remained, sitting on Noisome’s back.

“Crush his head with your club,” he urged. Badass limped closer, pretending to be injured.

“I have a better idea. Let’s capture him alive.”

“How’s that a good idea? We came for skins and meat. What good is he alive?”

“How so? You’re an engineer after all, how can’t you see? You’ll set him to running in the wheel, connect it to your generator. Let him pedal some energy for us.”

“Oh,” he said. “Yeah, he’s a living engine, runs on biofuel, of course! Help me tie him up. We can use the wire from Bart’s spear, the one that holds the tip.” 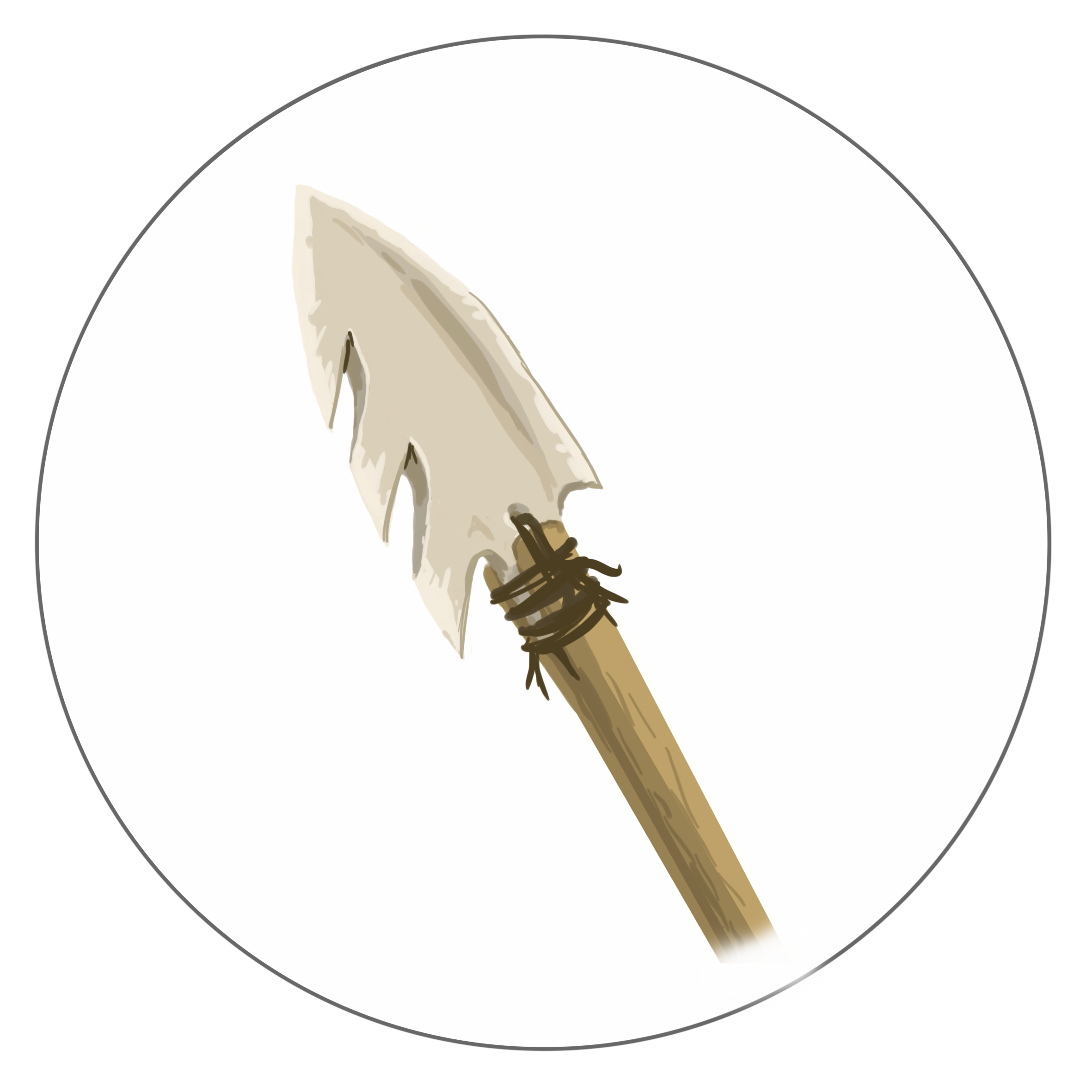 Badass glanced at Noisome. The creature looked back in reproach.

“I hope you got it, little one,” said Badass. “We won’t kill you, so don’t struggle and all will be well.”

“I got it,” replied Noisome. Tooler started and jumped up as if beset by a bloodsucker.

Noisome immediately took advantage of being released and sped away. For a moment, Badass thought the badger would escape. But just like before, Noisome’s legs failed him. He could only stumble a few paces before Tooler, startled though he was, reacted and jumped on him again. Badass grunted.

“Of course it talks. I told you they proved themselves to be intelligent creatures when I was in their set.”

“Unbelievable!” Tooler tapped the badger on the shoulder. “Hey, badger, can you really understand me?”

“Yes-yes,” gritted Noisome through his teeth. “Now get off me.”

“Didn’t you hear the badger?”

But Tooler hesitated, and before he could decide, voices from the set announced the party’s return.

“Injury mending complete. Implant energy level: 2,9%. Please charge internal systems,” announced Skinny. Badass ignored it, he only saw the bundles that the hunters carried as trophies. Bart had a slain badger slung across his shoulder, and also - as if that wasn’t enough - a bound and struggling Keio. Why on Earth didn’t they hide, wondered Badass. What part of my words didn’t they get? He shook his head: it was his own fault for expecting rational behaviour from half-wit beasts and a crazy woman. Bart threw the badger and Keio onto the grass. The others set down the things taken from the set. They had piles of frog skins, spears, baskets, nets and much more that Badass didn’t have time to notice.

“You fool!” Keio shouted when he noticed Badass. “What have you done?”

“What have I done?” repeated Badass in surprise. “What have you been doing all this time, dimwits?”

“Do you know each other?” Naiscy asked Badass.

“It seems we do,” he admitted.