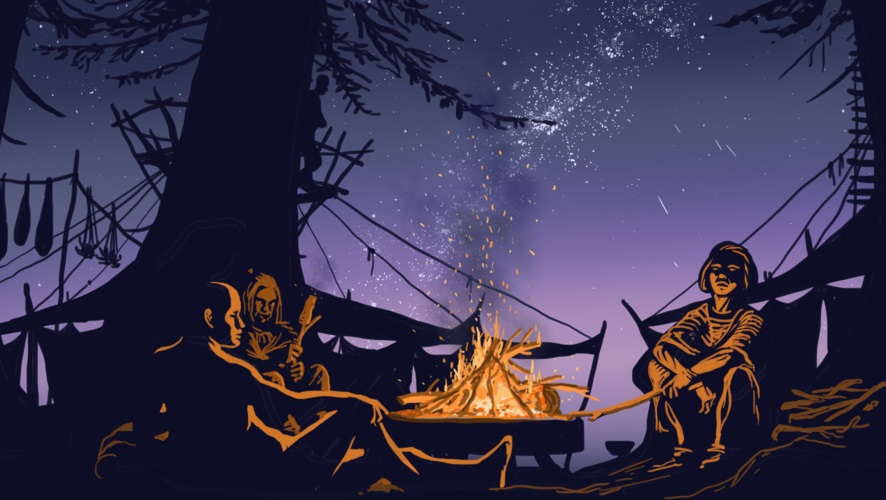 Badass waited until the people in the trees had settled and two of them climbed down to retrieve their javelins. A tattered blue-and-red-striped smart suit flashed under their clothes made of plant matter. The man was hairy, with a scraggly beard that gave him a wild appearance. In addition to his shirt and pants woven from organic materials, he wore a badger skin jacket on his shoulders. The woman had a badger tooth necklace, and Badass spotted the wrist computer's smart tattoo on their wrists. As faded and depleted as his own.

The wood rustled where the spider-rats had retreated and Badass saw that the beasts hadn't gone far: they were milling about nearby on the edge of the forest, wrapping their fallen comrades in cocoons and stringing them up on branches. Strangely, they didn't seem to disturb the humans, even though a battle for life and death had just raged on the clearing. When Badass was satisified that no one would attack the man and woman who had climbed down, he dared to emerge from the bush.

“Hey!” he yelled. The couple turned towards him, raising their weapons. But seeing Badass's peaceful intentions, they lowered them again, relieved.

There were around ten people in the village, all from Sundisk and stranded on the planet after the accident in space. The varying orbits of the pods had brought them down at different times: the last one landed a week ago, the first a whole month before Badass.

“The pods launched from the ship in different directions, but their programming directed them towards the closest habitable planet. Those that sped away in the wrong direction took a lot longer to turn around and reach the ground,” explained the man in badger skin, whom the others called Badger Bart.

They were sitting in the middle of the village, around a campfire which burned inside a large rusty iron pot on legs. Spider-rat meat was cooking on sticks and Badass's mouth watered at the smell. Apparently the villagers had tamed the spider-rats, in a way, and were using them. They threw all their food scraps to the beasts and if it was enough, the spider-rats left them alone, spinning their webs peacefully in the thicket of horsetails.

Naiscy, as the woman with Badger Bart was called, had discovered that their webbing made an excellent fabric for clothes. Even now she was crushing horsetails on a hollow rock, using a thick branch carved into a pestle. Once the plant matter was smashed into soft paste, it could be spread on the webs and stuck to them, creating a harmless organic fabric that could be refined with stone knives and bone needles, with no chance of it sticking to the flesh. One only needed to take care that the whole web was covered in plant paste, or else it could glue itself to naked flesh and tear it bloody.

The only trouble was, the spider-rats were multiplying like crazy. The villagers found new spawns of eggs nearly every day. Those were edible, which was good. But if they failed to locate the eggs, those hatched into new spider-rats in just a few days and, another couple of days later, the rats were big enough to be dangerous. The villagers couldn't feed so many. Sooner or later, once they didn't have enough food for all the animals, those gathered into a hungry pack and attacked the settlement, never retreating until their numbers were sufficiently reduced.

“It's easier to watch and cull them,” said Badger Bart. “But we don't want to finish them all, or we wouldn't get any more eggs or fabric.”
“What kind of planet is this?” asked Badass. “We were heading to Earth, but this doesn't look like Earth to me.”
“It's definitely not Earth.” Naiscy shook her head. “The Sundisk must have entered an asteroid belt while passing through this solar system. When the accident happened, I was in the gym, near the front of the ship. When the asteroid cannons are working, you can hear the howling of their reactors and the hiss of their cooling systems there, loud and clear. Right before the accident, I heard them fire constantly. For the lack of a better name, we've called this planet Mortalis.”
“It's strange that some things are right out of our training videos,” observed Badass. “Like the debris lying around everywhere.”
Badger Bart nodded, took the meat skewers from the fire and offered one to Badass. But the talk of debris didn't shake Naiscy's faith in her theory.
“An ark ship from Earth must have landed here and tried to terraform the planet. With partial success, it seems.”
Hope immediately flared in Badass.
“Then there must be colonists or their descendants,” he said. Badger Bart shrugged.
“We can hope, but it seems to me they either left or died. As far as I have seen, nature has reclaimed all.”

As time passed, darkness enveloped the village in the treetops. The night-time forest awoke, seemingly even busier than during the day. Dark shapes glided through the air, creatures both big and small rustled in the horsetails. From time to time, there were roars as large predators protected their territories from each other, or dying screams as they caught their prey, fighting for their life. Here and there, the thorny acorns of the strange oak trees glowed in a slight green haze.

Badass, Bart and Naiscy sat around the fire for a long time. They mostly talked about the chances of rescue. Naiscy was quite convinced they wouldn't stay on the unfamiliar planet for long. Certainly not for life. Protocol dictated that in the case of an accident, the ship's artificial intelligence would automatically send a distress signal with coordinates to their home. A rescue ship would arrive sooner or later, picking them up and returning them to civilisation. But they had to survive until then.

“As long as the rescue ship doesn't end up in the same asteroid belt and their crew doesn't land next to us in their escape pods one day,” Badger Bart said of Naicy's dream. “Besides, what if they don't receive the distress call, or arrive so late that we’ll have died of old age? We can hope for outside assistance all we like, but we shouldn't sit idly until they arrive. If they come in twenty years, I want to spend that time in a normal house, in a normal society, living a normal life. I intend to build all that here, through blood and sweat if necessary!”

“You're right, I wouldn't want to spend twenty years crushing horsetails with a pestle,” Naiscy nodded and Badass had to agree with them. Regardless of the rescue ship, they were marooned on an unfamiliar planet and had to build a life there, as well as they could. The others soon left to rest in their huts, but Badass curled up right there next to the fire, his belly full of meat. The hardships of the last couple of days had exhausted him so much that despite the uncomfortable conditions, he was asleep as soon as his head hit the roll of plant fabric that Naiscy had given him for a pillow.