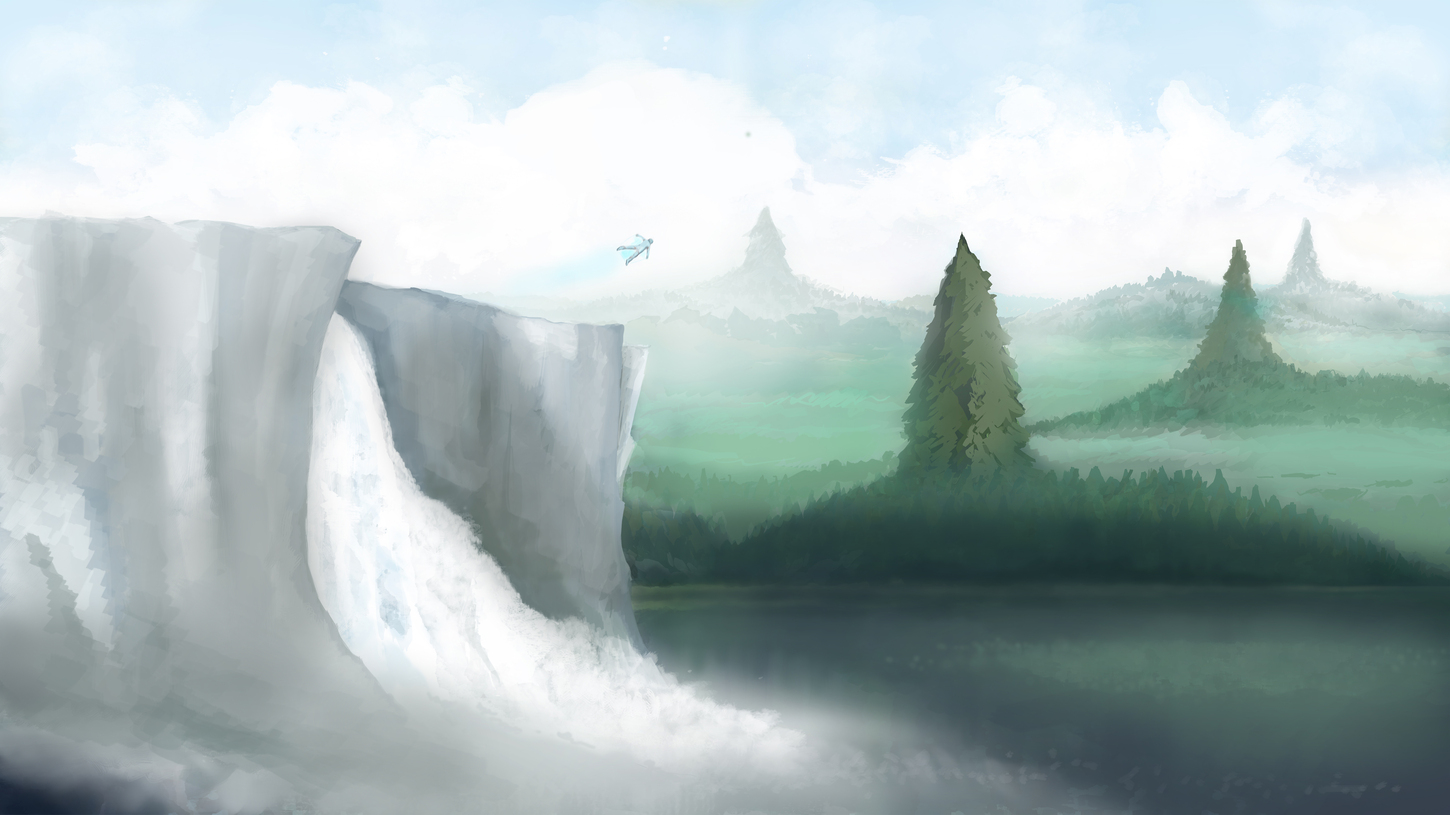 My guide, the river

I reach the flowing water much sooner than I’d dared to hope, with some strength still left in my arms.

The guiding stream looks tiny and harmless at first glance. After closer observation though, I see the deep groove that the water has been cutting into the everlasting ice. With no start or end in sight, the stream thrusts ahead - towards the unknown, to the direction where the day-star shines.

In the bright light the riverbed glows milky green; the rolling water flickers between vacuum black and a shimmering rainbow. Some heavy shadows lurk in the bottom - that’s where the stream has picked up some ice-bound boulders and dragged them along.

In the soft light filling the hollow under-shores, I can glimpse a thin film of verdant algae and a scattering of tiny holes, as if a swarm of gnats has burrowed into the ice.

Soon, I get to see the life forms themselves: a handful of black-blue insectoids emerge from the holes and disappear downstream in a smooth hopping formation. I think I shall call them ‘ice fleas’!


I align my little sliding raft and unfold the sail so that wind-swirls can pick it up. The shimmering fabric floats and bulges, flutters and rises. Then a powerful gust catches the sail, and off we go!

My vessel rushes downhill, racing the rapids. I tug at the tethers and can barely keep myself from sliding away from the river or, worse, dragged into the water.

As I’m busy steering, the surroundings slip past without much notice. I only see the river growing wider. Its flow does not slow down, however. The burbles build up to a rumble, the rumble to a roar, until farther ahead, the roaring becomes the thunder of a waterfall.

I loosen the sail tethers and glide to a halt.

When I finally look up to check the horizon, the view takes my breath away.

The ice fields that had no edge or end have suddenly shrunk into a narrow dirty strip, intercut with gravel. After a few hundred paces the ice cuts off altogether and thin clouds drift up from behind its jagged edge. Behind the clouds I can catch glimpses of green! Green, fertile land, with lush forests and sparkling lakes. As far as my eyes can see, more green - bumps and grooves, gradually shrouded by the blue air.

The thundering river hurls into the abyss. How could I possibly follow my guide without hurting myself further?

I nudge the slide-raft closer to the edge and take a peek.

The icy cliff towers high above big open water. The surface glimmers impossibly far down, so far that the waterfall fades into mist.

If I drove my slide straight off the edge, the parachute would certainly function. But would i still be able to steer it? All the way across the water? Unlikely.

I let my gaze linger on the woods that grow behind the grassy shores. Rising above the treetops, almost piercing the clouds, I see massive dark objects. Vaguely pyramid-shaped, they sway with the winds, and near the tops, I notice some movement.

Indeed, these appear to be some gargantuan conifers! And the nearest is not that far from the shore. A living tree would offer me shelter, perhaps even something to eat…

I assess the distance and the trajectory. If I shaped the smart-fabric into a gliding suit, it should carry me all the way to that treetop. And if it won’t… Well, we shall find out what happens if it won’t.

I spread the smart-fabric flat on the ice. Forming a glider-suit should be an easy task. It’s among the survivor’s basic blueprints - just like simple shelters, hammocks, and storage units that we should be able to make in our sleep.

But when I try to stand up to start working on the fabric, my legs give in. My whole body’s so utterly depleted that even the vacuum suit’s weight is proving too great a burden. So far the barely functional suit has kept me alive - but now, if I don’t escape its protective shackles, it could trap me forever.

Warm green land is within eye’s reach. In order to survive, I must get there in person. I drink up the filter pouch reserves and break free from the suit. I roll my body directly onto the sail. As the fabric gathers itself around my body, I mark the spots for the glider membranes.
Once the fabric is shaped and set, I fasten the seams, brush off the excess material, and drag myself back atop the raft.

After a good push, my vessel slides off the icy ledge.

When the final piece of my eggshell falls away from under my feet, I dive - head-first, into the rising winds.