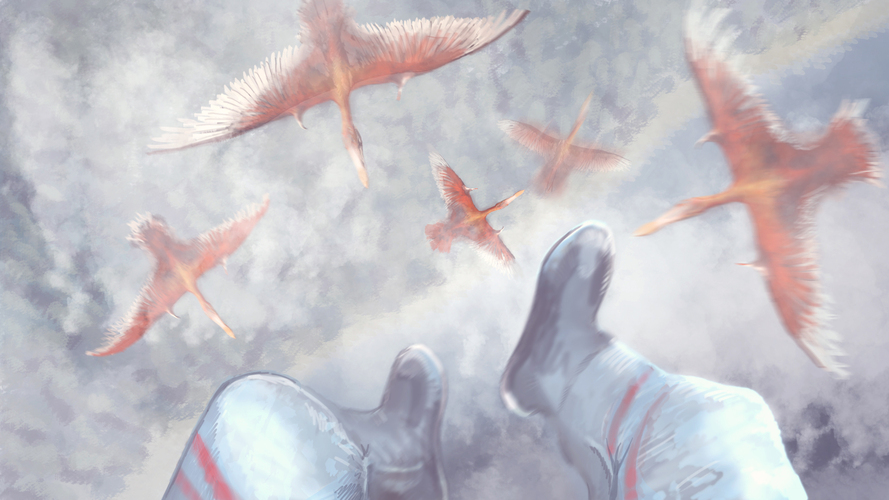 He had time to take a calm look around as he drifted downward. He noticed several other escape pods hurtling into the atmosphere, exploding, ejecting their passengers. No doubt other escape pods that couldn't survive the descent. Enlarging the image on his visor, Badass could make out two of his companions opening their buttercup-like nanofiber parachutes, but the third ejectee must have had a malfunction and the helpless body plunged like a comet. It soon disappeared into the forest. There was no way anyone could have survived that fall. Badass hoped it wasn't someone he knew.

But not all the pods were destroyed in the air. One lucky survivor entered at a better angle or at slower speed; its shell withstood the pressure. Alas, the pod landed somewhere on the ice fields. Badass didn't envy that passenger either. He followed the path of his two more fortunate companions and made a mental note that one of them fell toward the mountains, while the other drifted in the wind over to the swamp. He decided to find them the first chance he got, but first he had to survive himself. Watching the others, he had forgotten to guide his descent and discovered himself falling straight into the lake. He corrected quickly towards the shore.

The lake lay on the border of the ice and the forest. It was quite large, several tens of kilometers at its widest point and at least two or three times the length. The southern shore was icy, but greenery covered the northern shore. There was a large forested island in the middle of the lake. Badass noticed a suspiciously square rock on the island. It was completely covered in vegetation, but the sharp geometry hinted at an artificial origin. Further inland, he noticed huge evergreens, towering hundreds of metres above the forest like giants.

Badass was already pretty low when he saw a large flock of birds on his path. Noticing Badass, they screeched angrily and stormed him. Badass tried to fend them off by shouting, but to no avail. The birds tore at the parachute, tearing strips out of the nanofiber with their long toothy beaks and then they were upon him. In seconds, he was covered in bloodthirsty beaks and talons clinging to his spacesuit with sharp claws.

“Suit, battle mode,“ he croaked and two small lasers awoke on his shoulders. The wrist computer immediately identified the birds as a threat to its master's life and invisible lightning started flashing around Badass. In a moment, the air was full of burned feathers, talons and beaks. The attackers were gone, charred lumps falling around him.

“Status of parachute?”, he wheezed, even though he could see it clear as day.

“Oh fu…!” was all he had time for, before he hit the lake feet first.