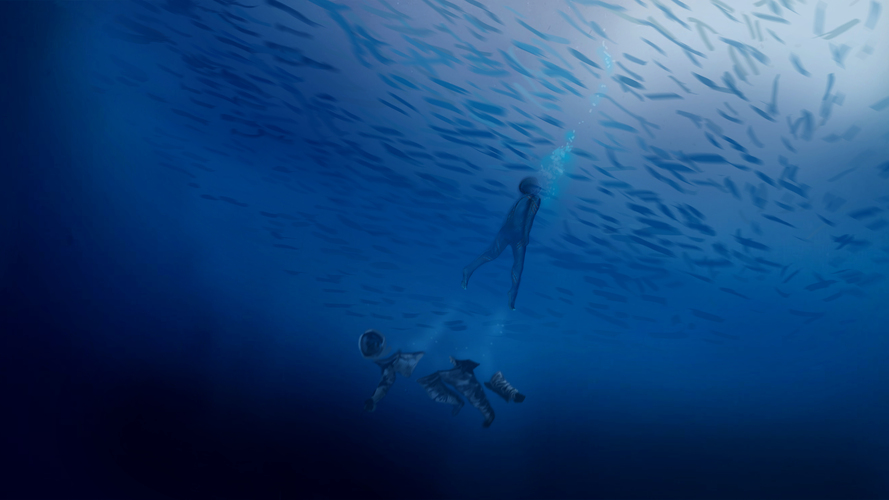 Badass's bones survived the impact with water mostly intact, thanks to the still-working titanium endoskeleton and servomotors of his ragged suit. Or mostly, as one of his arms still twisted around and a terrible flash of pain made him black out.

“Warning! Your forearm is broken, please refrain from moving it,” the wrist computer's smooth voice informed him. Water bubbled and roared around Badass. His momentum was so great that it carried him about ten meters below the surface and he hit the bottom. The shock sent a fresh jab of pain up his forearm, but the nanobots in his bloodstream were already working. Icy cold water rushed in through the holes in Badass's suit. Badass tried to swim to the surface, but the suit was heavy, holding him firmly on the bottom.

“Emergency ejection!” Badass managed to shout to the wrist computer as the water pierced his helmet. The suit clicked into separate modules and fell away. Wearing just the smart fabric wetsuit, Badass pushed off from the bottom and rose quickly. The wetsuit was buoyant and floated him upwards. In a few moments, Badass's head bobbed above the surface. He gobbled up mouthfuls of crisp, cold air.

The parachute's blue- and red-striped remains floated nearby, among a load of feathers and around ten charred birds. To his left, a bank of towering ice sheets stretched near the horizon, but the green and verdant shore was right here, a couple hundred meters away. Without a second thought, Badass started paddling toward it. By the time he reached the reeds, he was exhausted by his injuries, experiences and unusual physical exertion. But his troubles were far from over, as the lake was almost overgrown near the shore and Badass had to wade through knee-high muddy water. Gritting his teeth, he dragged himself through the sticky mass to dry ground and collapsed, spent and panting. At the same time, the wrist computer reported:

“Forearm mending complete. Implant energy level: 5%. Please charge internal systems.” Not that too, thought Badass groggily. The wrist computer's battery will soon run out, I will be left without a computer and the nanobots will switch off too. Then I'll be in real trouble….

It took a while before Badass was strong enough to sit up. The sun had sunk low. He looked around inquisitively. The shore around him was thick with shrubs and reeds, a forest rose in the distance. He was on an unknown planet with no equipment other than the wetsuit and an emptying wrist computer.

“Computer, map of surroundings,” ordered Badass. He was presented with a see-through hologram of the landscape, as much as he had seen during landing. The map wasn't drawn from any database, but saved by his suit cameras as he fell. Badass stared hard at the grainy image. There was no sign of any normal civilized settlements.

“By space,” he mumbled. The most reasonable plan seemed to be to search for his fellow castaways and decide the next steps together. But the trek across a landscape without roads promised to be difficult and, as the two he had seen had landed kilometers away, there was no chance of reaching them in the diminishing daylight. His best bet was to spend the night in the vicinity, get some rest and set off in the morning. But how and where should he settle down?

He had no idea how long he had spent unconscious in the escape pod, but judging by the state he was in when he reached the pod, he suspected it was days. The nanobots in his blood and the medical systems in the pod had fixed his burnt and injured body, revived him and probably pumped him full of nutrient solution. Now his stomach drew his attention, growling loudly. What could he dare eat here? And where to find food?

Badass closed his eyes for a moment, counted to ten and looked around more calmly. He intended to survive. It wasn't likely he would find food, so the best course of action would be to build a nest for the night that would keep away possible forest creatures. Glancing around hopelessly at the surrounding wilderness that he had no idea what to do with, Badass remembered the parachute's remains and the charred birds floating in the lake. He had everything, food and shelter. He only needed to fetch them from the lake. The parachute could make a cocoon in the treetop and the birds might be at least partially edible. If the whole thing hadn't sunk by now. He wasn't worried about the parachute, but he couldn't comment on the buoyancy of charred birds, lacking any experience.

Having decided, Badass retraced his steps towards the lake. He waded through mud and was soon splashing in the cold water again. The nature around him was beautiful. The bloody rays of the setting sun painted the waves' reflection a poisonous red. If he wasn't so busy struggling in the water, he might have even enjoyed the view. But now he was fighting for his life to reach the blue- and red-striped cloth and darkened feathery lumps drifting away from him. Fortunately, nature extended a helping hand. A strong headwind gathered, raising waves, but luckily for Badass it also pushed the parachute towards him. At last he caught two of the charred and sodden bird carcasses and pulled the parachute behind him. Badass would have surely drowned if the suit hadn't kept him above surface, as he was frozen stiff and could hardly move. He turned around and, after a determined struggle, reached the familiar shore mud. He stumbled to his feet, completely spent, and... froze. It was already quite dark, but he could clearly see a short creature covered in black and white fur, standing on two feet and staring at him in surprise. The creature carried a green leather pouch slung over one shoulder, a bone fishing spear in hand.

It took Badass a while to realise that he was hearing a translation. The wrist computer was automatically relaying the stranger's speech.

“Computer, what language is it speaking?” Badass asked.

The computer took a while before answering. “According to my databases, it is most similar to a badger.”

“Are you a badger?” Badass asked of the creature. It tilted its head to the side, showing some bright white teeth as if the question amused it.

“Haven't you seen a badger before?”

Badass shook his head. The situation seemed totally absurd, until he suddenly realised.

“Have you seen humans before?”

The badger rolled its eyes.

“Of course, I've even sent some to the beyond.”

Badass's glance fell on the bone spear in the badger's furry, long-fingered and black-clawed paws and he took an involuntary step back towards the open water.

The badger laughed, barking and flashing its teeth.

“Don't worry, I have other plans for you. Beware the frog.”

Badass suddenly realised he had been hearing a strange splashing behind him for a while. He looked over his shoulder to see a giant, monstrous frog, at least a metre high. Badass didn't have time to do anything before the frog opened its immense mouth and a wide tongue flashed out, wrapping itself around Badass, yanking him off his feet in a moment. The frog's tongue burned like acid and Badass's suit melted where it touched him. Badass tried in vain to wriggle free, but the frog pulled him closer in sudden bursts. The tongue squeezed so strongly that a terrible pain wracked his whole body.

“Attention, your vitals indicate physical violation,” the wrist computer said pleasantly. “I recommend ceasing the harmful activity and removing yourself from danger. Implant energy level: 4%.” That was the last thing Badass heard before blood spurted from his mouth, the world blackened and he lost all consciousness.