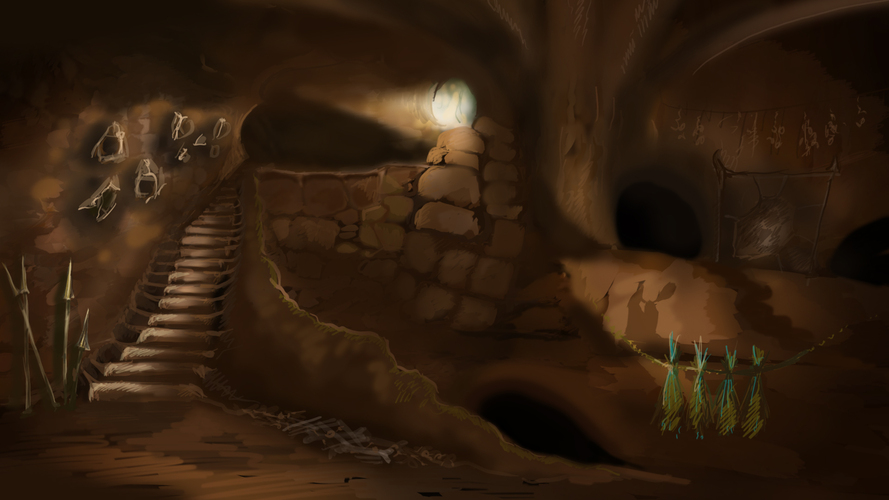 When Badass awoke, he was floating comfortably on waves of peace. The world seemed soft and benevolent, he had no wish to open his eyes or think. The frog slowly emerged from the deep recesses of his mind, along with its tongue gently wrapping around Badass's waist. Badass would have happily petted the creature, but the wrist computer's AI had registered its host's awakening and announced smoothly:

“You have been given an analgesic sedative based on natural substances. Implant energy level: 3%. Vitals restored to acceptable level by nanobots. Further injuries not recommended, nanobots switched to energy saving mode. Charge internal nanosystems at the first opportunity.”

After this announcement, Badass heard soft footsteps nearby and registered that he wasn't on Sundisk in his cot, safe and sound, but lay on an unknown planet in an unknown location after a life-threatening attack and an unknown presence was creeping around him. Badass shuddered and sat up quickly.

He was in a low underground cave. The walls of the cave were covered in a thousand practical knick-knacks. There were hunting and fishing supplies, bundles of furs and dried herbs; gnawed animal bones were piled on the floor. Mostly small rodents unfamiliar to Badass, but he thought he recognized the distinct shape of the biggest prey – the giant frog, whose enormous skull was used as a table. A rough frogskin covered Badass's cot and rows of smoked and dried frog legs hung from the ceiling. He saw some kind of herbal infusion in a clay bowl on top of the giant skull. That must have been the liquid he still tasted on his lips, that his computer had identified as a pain-killing drink.

In the center of the room stood the cave's master, the familiar two-legged creature with a sharp intelligent eye and black-and-white fur.

Badass slid his feet to the floor. He felt dizzy for a moment, but it passed quickly. The badger's furry ears twitched anxiously and Badass noticed that the creature still held the bone spear, its sharp end pointed toward Badass. Strange, considering the badger must have dragged him here and given him the pain-killing herbal remedy.

“My name is Badass.”

“Pretty fancy name for a man who was almost eaten by a frog.”

“Well, I didn't choose it myself. I come from space. My real name is 8-AD-455. The robots who grew us from embryos in the spaceship's biolab identified us by codes. We made them into something catchier. My friends started calling me Badass. I got to this planet by accident, something happened to our ship.”

“Touching story,” said the badger. “You may call me Noisome. But I didn't drag you here to exchange life stories. I have a proposition. You're the first of your kind who can speak our language and doesn't try to kill us immediately. As soon as I heard you speak, I realised how I could use you. I want you to bring the Iron Merchant to us, act as a go-between, a translator. We don't speak his tongue and he doesn't serve those who don't understand him.”

The request was so far out of this galaxy that Badass's brain froze for a moment.

“That's what we call him, on account of his shiny metal skin.”

Noisome didn't seem to care a whiff about who Badass was, where he came from and how he got here.

“I already told you. Because you are a human and you speak their language.”

Badass tried to gather his thoughts.

“Wait, why don't you talk to him yourself?”

“We can't speak Human, our mouths are built differently.”

“Why in Space should I do that?” Badass asked.

“Tell him about the treasure,” cried someone from a dark passage.

“Not to mention being thankful for saving your life, which was a lot to expect from a human, I can lead you to a great treasure,” Noisome said.

What in the black hole would I do with a badger treasure, thought Badass. I am alone on an unfamiliar planet. I need to survive and reach my people.

“What is that treasure?” asked Badass. “Frog bones and dried frogmeat?”

Once again, the badger flashed its teeth.

“Gadgets of the technomages,” it said.

That got Badass's attention. If the badger knew that word, primitive though it was, there must have been a technological civilization around, industry, maybe even space flight capability? Maybe humans? The Iron Merchant with the metal skin could have been a robot. Where there's robots, there's people!

“Where do the technomages live?”

But the badger wasn't stupid. It understood that Badass was only interested in information, not fulfilling its request.

Badass considered this and nodded. Where there's robots, there's people. “All right, lead me to the Iron Merchant.”

His answer seemed to relax the badger. The spear that had been pointed at Badass sunk a little lower.

“We've never met him ourselves, only heard of him. They say he travels near the mountains, the locals might be able to guide you better.”

Badass got to his feet. He was feeling pretty good, but he discovered a new problem. The frog's acid tongue had destroyed most of the clothing under his spacesuit. He was only left with ragged pants and the wrist computer installed in his body. The badger stood aside, opening the way to the passage that led outside. Badass wasn't going to ask it for clothes. The furry creature didn't need any and probably couldn't offer them.

It turned out that the cave where he lay was at the very heart of the badger tunnels. There were tens of the badgers, large and small, those who worked and others who escorted him anxiously with stone axes and bone spears. To get out, Badass had to traverse around ten connected caves full of busily working badgers. In one, they were skinning a freshly-killed giant frog; in another, the skin was cleaned; in the third cave, the badgers fashioned frog bones into throwing spears; in the fourth, they made stone axes and, in the fifth, a giant frog carcass turned on the spit over flames. Without a badger guide, Badass could have easily gotten lost in the labyrinth.

Finally they reached the exit and the midday sun seemed exceptionally bright after the dark caves. They were on a sandy hill near the lake. Strange plants hid the entrance from view in all directions. A single quite unnoticeable path wove between the bushes toward the shore. Badass's stomach growled long and noisily and he remembered he hadn't eaten for a while. He turned to the badger to ask for provisions, even a frog leg, but the body computer was quicker, announcing smoothly: “Implant energy level: 1%. System will switch to power saving mode in five seconds. Closing translation program. Closing holographic map.”

The chance to ask for food disappeared along with the translation program. Badass sighed, nodded to Noisome and set off on the path towards the lake.